There is a game played frequently at genome sequencing conferences that helps to sustain many a flagging attendee. It’s called Moore’s Law Bingo and the rules, if they exist at all, can be summarised as follows.

Every time a delegate references Moore’s Law, say by presenting a plot of plummeting sequencing costs or by making a passing reference to how sequence performance has “outstripped Moore’s Law”, that nod to Moore should be met with a knowing smile, an arching of the brow and a wry twitter posting. Perhaps the more enterprising attendees might share in an improvised score card. I am awaiting the inevitable smart phone app with interest. 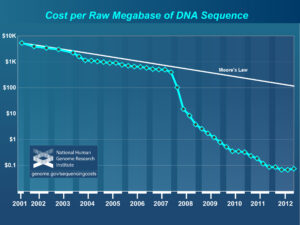 To the uninitiated all this might seem a singularly obscure thing to do. So what is going on? Well, quite simply in sequencing circles Moore’s Law is employed as an analogy to highlight the truly phenomenal decreases in sequencing costs, and accompanying capacity increases, over the last decade. And, as an analogy it has, well, been a tad over-used.

Gordon E. Moore, Intel co-founder and a paterfamilias to the processor, predicted back in 1965 that every two years the number of transistors that could be fitted onto an integrated circuit would effectively double: a throw-away industry one-liner that has proven to be a staggeringly prescient piece of Nostradamus-like insight for predicting future computer processor speeds, memory capacity and many other rates of technological development dependent on the humble silicon chip.

And just as computer processor speeds have increased exponentially largely in the way anticipated by Moore so too, by analogy, have genome sequencing costs plummeted from $100,000,000 back in 2001 to a mere $1,000 widely anticipated this year, 2013. Indeed this is a trajectory that in the last four years has even surpassed Moore’s own extrapolation.

Technological change of this magnitude is jaw-dropping and Moore’s Law meme provides a neat shorthand for encapsulating the trend. Sadly, the trajectory of helpful rhetoric from meme to cliche tends to be equally precipitous. So now when someone at a scientific meeting either guilelessly (or wilfully) mentions Moore Law he or she is likely to illicit a mock groan among the older genome sequencing lags (many now well into their 40s).

It’s all good harmless fun and one of the many ways to make conferences pass in a convivial fashion. Yet I still harbor a quiet respect for this much abused rhetorical flourish. For it acknowledges the most singular of facts and one that continues to amaze when given serious thought: namely that we can now sequence DNA really fast and really cheaply. And whilst this is old news for the sequencing glitterati to the extent that referencing Moore’s Law is akin to commenting on how expensive a pint of beer is these days, it is nonetheless a staggering technological development, the consequences of which are still largely unrecognised by wider society.

Everything currently alive on this planet, and some that are no longer, can now potentially be sequenced. From birds to bacteria, chimps to chips (well, potatoes at least), nematodes to neanderthals; all are having their coded secrets exposed for us to see (if not actually quite understand). Indeed, Moore himself has joined the increasingly non-exclusive band of the great, the good, and the self-absorbed, who’ve had their genomes sequenced and, rather bravely it must be said, made the results available to the world to pour over. Truly, the dedicated cyber-stalker has never had such rich pickings.

With every passing day the probability that we as individuals will have our double helix-coils sequenced before we shuffle off our mortal-coils increases (at least for us wealthy First Worlders). Already the concept of being sequenced at, or prior to, birth is increasingly talked of as reasonable, desirable, vital even. Wonderful opportunities that bring in their wake doomsday scenarios are already just a sample prep away.

So, cheaper, faster, more robust sequencing means many more genomes being sequenced. But it means much Moore than that. Just as the silicon chip increasingly dominates our 21st century lives, so too is sequencing technology permeating many areas of modern research and in so doing is changing the way we see the world and ourselves.

Merely decoding our genes is just the beginning. With scalpel like precision, modern sequencers can now follow the very ebb and flow of gene expression within our cells, tease apart the complex regulatory mechanisms that orchestrate this expression, and rummage through those parts of our genome some (though by no means all) had previously dismissed as junk. Even our textbooks on inheritance are having to be rewritten as sequencers begin to reveal previously hidden epigenetic truths. In short, we are currently at ground zero of a paradigm shift the like of which would have had Thomas Kuhn saying “See! See! That’s what I mean!” and asking for a higher advance from his publisher.

I’ve stressed that Moore’s Law is an analogy; an observation of an exponential trend in silicon chip miniaturisation that mirrors, but does not explain, the advances we are seeing in sequence technology. Sequencing advances have been driven by miniaturisation of a different though comparable kind. And yet within the last couple of years a new way of sequencing has emerged that directly uses silicon-chip based transistor sensors to directly read DNA. So it turns out Moore’s Law is no longer an analogy after all.

So the next time I’m at a genomics meeting and the speaker invokes Moore’s Law, I shall raise a metaphorical glass to Gordon and reflect once again on the truly staggering changes in our perception of the world due to genome sequencing technology. Then I’ll score a hit on my iPhone Moore’s Law Bingo app, deploy my wry ‘wise old bird’ eye-roll and shout BINGO!