Dafydd – One in a Million

Dafydd was a happy smiley baby and despite a difficult birth (born 2 weeks early by emergency C-section) he had no obvious problems. He developed normally and although we thought he was a bit slow with some things, and was a good sleeper, we had no idea anything was wrong. Until Dafydd got to about 10 months old.

Dafydd was starting to move around he could roll, push himself up on to all fours, sit up, hold his head up, grab toys, move toys between his hands, eat finger food, point at what he wanted and drink from a bottle.

From the start of July 2019 he began to regress and lose skills. He became ‘floppy’, could no longer sit up to feed, could no longer feed himself finger food and had no strength in his muscles or had very stiff movements (which he had always had). He began to lose weight and was sleeping for very long periods of time.

Initially the Health Visitor said it was probably nothing serious but to book an appointment with the GP. A week later, when we visited the GP, Dafydd had deteriorated further and the GP was so worried she sent us straight to Glangwilli Hospital for initial tests. From there he was sent to Noah’s Ark Children’s Hospital in Cardiff for further testing under the neurological team. He stayed for almost 2 weeks. He had every test we could possibly imagine. MRI, CT Scans, lumber puncture, EEG, ECG, bloods, sleep scan, eye test, developmental tests, physiotherapy, Speech and Language Therapy. Every test came back negative.

Dafydd had to be fed through a naso-gastric tube as he could not hold his head up to eat. Initially they told us we would not be sent home without a diagnosis. However it looked like a diagnosis would not be forthcoming so the last test was a genetic test (Whole Exome Sequencing) and we were sent home. The test had only been available to the team in Cardiff for a few months and they warned us it could take a while for results to come back, or the results might not explain Dafydd’s symptoms. 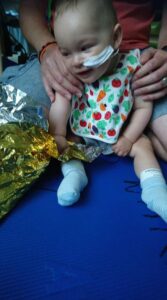 The results came back sooner than we thought the diagnosis was Dopa Responsive Dystonia (DRD). A genetic disorder that he had inherited from us (his parents). Both of us have passed on a faulty gene meaning his body cannot make tyrosine hydroxylase an enzyme that helps the body produce dopamine, which transmits signals between nerve cells in the brain to help control movement. Luckily we were told that there was medicine that could help, which is often used by adults with Parkinson’s disease. Dafydd has been on his Levodopa medicine for over a year now, he has regained all of the skills he lost and learned a lot of new ones, taking his first steps – unaided – just before his second birthday. The medicine was just one part of his treatment as physiotherapy, OT and SALT played a huge part in re-learning and developing new skills.

Dafydd’s Dad had to give up work to care for him as his feeding, medicine, and appointment regime was quite complicated. Lockdowns and the global pandemic meant face-to-face appointments had to stop but as Dafydd progresses we don’t need quite so much support.  We know we are very lucky as his condition is treatable with medicine, and we got a quick diagnosis, but our fear is for Dafydd’s future as cases in children his age are rare. Worldwide cases (all ages) are estimated 1 in a million. Doctors are unsure how his development may progress, and the level of care he will need going forward. We are very concerned about his long term physical development but also his social and emotional development.

Since Dafydd was diagnosed we have found a Dopa Responsive Dystonia group on Facebook. This is for people with DRD, and parents or carers of those with DRD, there are over 1,000 members worldwide. The group has been so supportive, to be able to connect with people across the world who can tell you what it is like to have a child with DRD is a lifeline. We asked a lot of questions of the group when we first joined and are now able to answer some questions that newer members have. Dafydd’s condition is rare, perhaps only a handful of people in Wales have DRD, but globally he is part of a much larger Rare Disease Community. 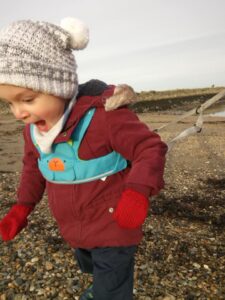