Britain’s first SWAN (syndrome without a name) Clinic has opened at the University Hospital of Wales — offering hope to children and adults with syndromes so rare they don’t have a name.

Commissioned by Welsh Health Specialised Services Committee (WHSSC) and funded by Welsh Government, the SWAN Clinic has been established by Cardiff and Vale University Health Board to improve pathways for people living with rare, undiagnosed conditions across Wales.

Although rare diseases are by their nature individually rare, collectively they are common with 1 in 17 people being affected by a rare disease at some point in their lifetime, equating to around 175,000 people across Wales. There are thousands of known rare diseases that affect both children and adults, but some are so uncommon and difficult to diagnose they are known as a ‘syndrome without a name’ or SWAN.

Rare diseases disproportionately affect children and 30% of children with a rare disease will die before their fifth birthday. Many rare diseases affect multiple systems of the body, and families describe a “diagnostic odyssey” of seeing many different specialists on a journey before a diagnosis is made. The SWAN clinic will offer a one stop shop to circumvent this.

Lynne Hughes, of Pontyclun, Rhondda Cynon Taf, knows all too well the emotional and physical challenges that patients living with a ‘syndrome without a name’ and their families face. Her daughter Amy Hughes died in 2020 when she was just 32-years-old. Amy had learning difficulties and suffered from multiple complex issues throughout her life but medical professionals were unable to diagnose her condition. 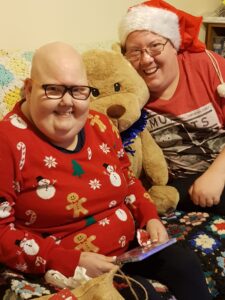 Lynne’s son Michael, 36, is now under the care of the SWAN Clinic, having developed some of the same symptoms as Amy.

Lynne said: “Amy first started getting ill when she was three and throughout her life we weren’t able to get an answer. Sometimes we were given answers to just part of the issue, but we never fully knew why it was happening.

“Despite all of her problems, she took everything in her stride and never asked what was wrong with her. She wasn’t very independent and relied on me for everything, especially towards the end, but she just accepted it.

“She passed away in November 2020, very shortly after we found out she had a brain tumour. I don’t know if having a diagnosis would have changed but it would be nice to be able to put a name to it and finally know what the problem really was.”

Amy’s DNA has been stored and will be reviewed and retested in the hope that it could help other people living with undiagnosed conditions. Michael has also undergone additional genetic testing and while no diagnosis has been made yet, Lynne is hopeful the service could provide answers.

Speaking of Michael, Lynne said: “It was only about three-and-a-half years ago when he suffered a bad infection and developed sepsis that he started to become unwell and develop some of the same symptoms as Amy.

“Thankfully he isn’t as unwell as she was, but I don’t know if he’s going to continue becoming more unwell. The SWAN Clinic gives me hope that we will find out what was wrong with Amy and what is causing Michael’s problems.”

Having secured £430,000 in Welsh Government funding, the SWAN Clinic will initially run as a pilot for two years and aims to shorten the time patients wait for a diagnosis, improve medical knowledge and foster research.

Dr Graham Shortland OBE the clinical lead for the SWAN clinic, said: “Rare diseases are a significant health problem that are unfortunately associated with poor outcomes. The impact on patients and their families is considerable, with the majority of patients who do receive a diagnosis waiting an average of four years.

“A diagnosis brings hopes and reassurance to families and the goal of the SWAN Clinic is to shorten the diagnostic journey, improve access to specialist care and support those who continue to await a diagnosis.”

Prof Iolo Doull, the Chairman of RDIG, said “The Wales Rare Disease Plan aims to improve the care of all people with rare diseases by helping patients and families get a final diagnosis faster.

“Many patients have complex needs and the plan sets out ways to improve the coordination of care. This will lead to improved access to specialist care including new treatments and medicines. We need to increase the awareness of rare diseases amongst all healthcare professionals. The SWAN clinic is an important part of this bigger overall plan.”