Expression levels for transcripts within the Explore-IDs list can be displayed graphically as a heatmap. 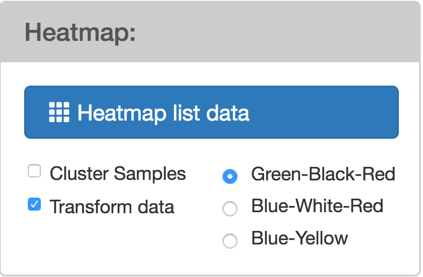 Data is log2 transformed and median centred before hierarchical clustering (using average linkage and Pearson’s correlation as the similarity metric) is applied to group similar data together and reveal any patterns within the dataset. The resultant values are then converted into colours, where the default uses green to represent under expression (compared to median), black approximates to median expression and red represents over expression.

Distance from dendrogram leaves to the root node is gives an indication of the similarity between adjacent row and clusters.

By default samples are ordered by their display order in Genview2.  If required you can click the cluster samples box and re-generate a heatmap with the samples as well as transcripts clustered.